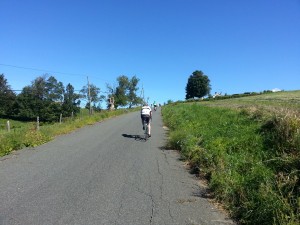 One of the easier climbs on the D2R2 since it is on paved road. It is still about a 12 percent grade though. 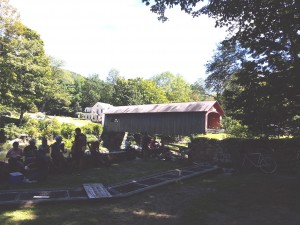 A peaceful place for lunch. 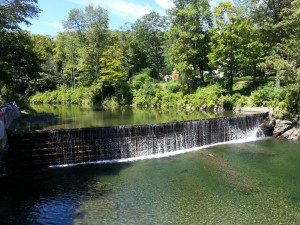 The dam at lunch 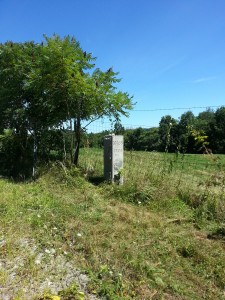 Crossing into Vermont. The practice of these markers was to show which side of the border you are on. 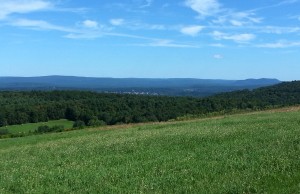 I am on a ridge, which is probably the most scenic towards the end of the day. The town of Deerfield, MA is down in the valley and is the finish point. I am about 1/2 mile from the final rest stop before another grueling 7-10 mile to the finish. 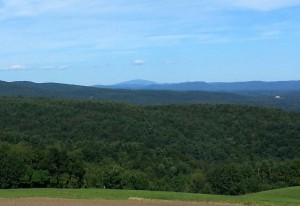 The tall mountain you see is Mount Monandock which is in New Hampshire. This picture was taken on the same ridge and from the same spot I took the picture of Deerfield.

This was the second time doing this ride. I must say that it went a lot better than the last time, where I drove out the morning of the ride and shredded a rear tire on my car and sat on the Mass Pike for almost two hours while it got fixed. I ended up getting a late start as a result. This year I used some of my credit card points and stayed at a nice hotel nearby and got a good nights sleep. This allowed me to get out early enough and not feel rushed about getting out on the ride at a decent time. However, two minor flies tried to land in my ointment, but I managed to swat them back.

The first fly that tried to land was my GPS. All the time I spent mapping out the course from the cue sheets to my computer to download to my GPS was for nothing. I forgot to download it! Another rider who also had a GPS reminded me that I wasn’t totally sunk as at least the GPS would show the upcoming roads and if I paid close attention to the cue sheets. Also, since I was getting a good start I found that I was really never that far out of sight of other riders, either ahead or behind me, who were on the same course. Fly number one swatted!

The second fly arrived in the form of a couple of other riders I was going to ride with. They were nice enough guys, don’t get me wrong, but one guy told me that they planned to hammer through the course. He had a cross bike and his friend had a mountain bike. I decided to give it a try and kept up a reasonable pace. I figured I could keep up with the pair since one of them was also riding a mountain bike. Well gearing is everything, I was geared to low to keep up with them and I did not want to expend all my energy in the first few miles so I told them to go ahead. A wise choice and my second fly was swatted.

I will say my navigation was a lot better this year. I did not get lost. My climbing was better too. I learned from past experience and had the right gearing for climbing and my tires were better suited than the last time.

I only got off my bike to walk it twice, unlike the last time when it seemed like I was walking it uphill a lot. I do believe I have to credit all my riding this summer which included a lot of hills on my road bike (but the hills in eastern Mass were paved and not a steep and long). The first time I walked it was part of the way up my first dirt hill climb. I thought as I dismounted, “crap, this is going to be a bad day”. It turned out to be more of a result of forgetting my trail riding skills as I was out of position in navigating a climb and dismounted halfway up a hill. It’s just not that easy to remount a mountain bike while going uphill on a crappy trail. The rest of the day was grand. Yes, I got passed by more than several riders going uphill. But they were huffing and puffing pushing higher gears. I had the foresight, for once, to have my gearing changed out so I could sit back push a high cadence of about 80 rpm and move forward uphill at just above a fast walking pace.

The only other time I walked my bike was a result of the final gnarly downhill. It is a tough downhill, not really steep but about a mile long with twists curves short uphills before going back down. There are granite ledges or steps sticking out of the road, deep ruts running in different directions, rocks of all sizes, holes some filled with deep, deep sand some not that you could not see until it was almost too late. The reason being was that you the road went in and out of the shade so your eyes could not adjust quickly enough. The deep sand got me and took me down. The only casualty was my pride and a little dirt on my knee as well as a small bruise. After that, I decided to walk my bike a little until the road improved and I could see where I was going better. Again I forgot an old mountain bike trick, you have to power through these sections, it seems counter-intuitive as you want to brake. I remembered that lesson a little too late.

If you are reading this, you know I made it. If you would have asked me in the middle of the ride if I was going to do this again next year, I would have probably said no. I am still not sure. I want to see how my off-season goes and if I can shed a few more pounds.

As for the ride experience itself. It is run like a well oiled machine. The volunteers that work behind the scenes and at the food and waterstops are fantastic! They were helpful and were always smiling, which must be hard to do given that there were probably a lot of grumpy riders who misjudged their riding ability. There was plenty to eat and drink before, during and after the ride. The scenery on this ride is outstanding and I have several pics that I will upload later. I just have to say that it is a great experience and the ride is for a good cause. The Franklin Land Trust (www.franklinlandtrust.org). A.J.